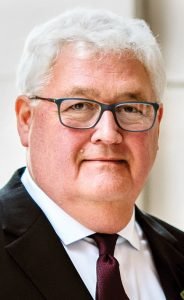 Dr. Galen Ebert, age 69, of Imlay City, MI, died on Saturday, November 20, 2021. He passed peacefully while surrounded by his loving wife and sons. Galen Roy Ebert was born on July 11, 1952, to the late Roy and Frances (Gettel) Ebert. Galen was proud of his Huron County roots as he grew up on his family’s dairy farm in Pigeon and graduated from Laker High School in 1970. He served as class president and even emceed his 51st class reunion this past fall.

Galen, first in his family to attend college, worked his way through both high school and college as a butcher for IGA. He began his journey at Northern Michigan University as a walk-on for the football team. Galen later transferred to Michigan State University where he received his Bachelor of Science in Chemistry in 1975. Galen went on to earn his Master of Science in Analytical Chemistry from Wayne State University in 1977. His educational path then took him back to East Lansing where he earned his Doctorate in Osteopathic Medicine from MSU in 1984. Prior to medical school, Galen worked for Chrysler as a chemist.

Dr. Galen Ebert was a board certified family practice doctor with over 37 years of experience. After his residency with Saginaw Osteopathic Hospital, Dr. Ebert became affiliated with Lapeer Regional Hospital and practiced out of the Lamb-Steele building in Imlay City. After a short stint with Mount Clemens General Hospital, Dr. Ebert opened his Imlay City family practice, Ebert Medical, in 2002. He had a penchant for treating any patient who walked through his door.

Galen married Ingrid Ann Sorensen on September 6, 1980. Together they raised two wonderful sons, Chris and Eric. Galen greatly enjoyed spending time with his family from movie marathons to the family’s annual summer vacations in Bellaire, MI. He was a talented musician, playing both the organ and keyboard in his childhood band, “The Outlaws,” as well as during worship services at church. Additionally, he was a proud member of the Imlay City Rotary Club. Galen lived his faith, believing that kindness is universal and allows people to see the goodness in humanity through one another.

Galen is survived by his wife, Ingrid; sons Christopher (Katelyn) Ebert of Troy, MI; and Eric (Krista) Ebert of Royal Oak, MI. He was adored by his two grandchildren, Ryan and Lauren Ebert of Troy, MI. Galen was preceded in death by his parents.

A Celebration of Life will take place 2-5 and 6-8 p.m., Sunday, December 5, 2021 at Muir Brothers Funeral Home, 225 N. Main Street, Imlay City, MI. A graveside burial of ashes will take place in the spring in Pigeon, MI.

Those wishing to make memorial contributions may direct them to: Imlay City Rotary Club or Galen Ebert Scholarship Fund.

Please be sure to sign the online register at muirbrothersfh.com to share condolences and memories with the Ebert family.