Last month, Orion Renewable Energy Group, L.L.C. met with property owners at the Knights of Columbus Hall for listening sessions. The company will use some of the feedback received that day as they make final preparations for the permitting process, said Michael Cressner, Orion’s Director of Development.

“We want to make sure we have a site plan that addressed the concerns raised as best as possible,” he said.

“It’s helpful to get feedback from local residents as an extra step to mitigate any potential impacts.”

Invitations to attend the meeting were sent to everyone who had an address within 500 feet of the project boundary.

Attendees had the chance to share their concerns and ask questions and company officials said they provided clarification about their plans. 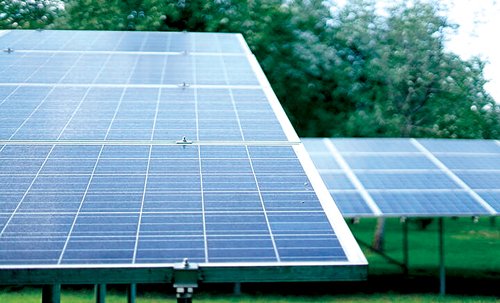 Cressner said the vast majority of attendees had concerns as it related to the visual impact of the project.

The 100 megawatt development will encompass approximately 2,800 acres but the actual footprint of the project will be smaller than that. At present, Orion is looking to construct a series of arrays on land between Bowers and Kohler roads.

He said Orion representatives explained the voluntary setbacks from homes that they’ll utilize for facilities and the screening requirements.

“There were also concerns about how we might impact wildlife movement in terms of hunting,” he said.

Using feedback from local residents, he said they would like to create more corridors where animals are known to move frequently.

Cressner said they also explained that the development won’t be a solid block of solar panels but smaller groupings that look more like individual projects.

“We had a lot of constructive conversations and many told us they respected the opportunity to talk about the project,” Cressner said.

Per Goodland Township’s ordinance, solar energy facilities are allowed as a special land use and that request will go first before the township’s planning commission. The special land use application will require Orion to submit a project description, anticipated construction schedule, decommissioning plans and a complaint resolution process.

If that permit is approved, the project moves on to the site plan review stage and that’s when additional documentation, like project area boundaries and the locale of all proposed structures and access roads, must be provided.

Goodland Township Supervisor Ron Cischke confirmed that Orion hadn’t yet submitted anything to the township.

“There’s a lot of work yet to do and we’re interested as much as anyone else as to what the proposal will look like,” he said.

Once applications are filed, all residents within 300 feet of the project boundaries will be notified and informed about public hearings.

Jessica Keeping was one of the local residents to attend the Orion meeting. Although she’s an Imlay Township resident, she and her husband Bryan own property in Goodland Township.

Keeping has had concerns about the project since the beginning and said she and her husband have declined Orion’s offer to enroll their land in the development.

She said she was grateful for the chance to have some of her questions answered by Orion staff but still questions the necessity of the project.

“I’m not totally sold on it for a lot of reasons, but my main concern is that I don’t want to us taking away farm land for solar panels,” Keeping said.

“Solar panels should be on buildings and all the spaces that don’t grow food for us. Removing the resource that we need to feed people is dangerous.”

She questions the need for using farmland for a green energy source when plants themselves remove carbon dioxide from the air and store it underground in their roots. Keeping is also concerned about the company’s plan for eventually decommissioning the site and how they’ll dispose of or recycle the panels.

Cressner said Orion also used the recent meetings as an opportunity to highlight the positive impact the solar energy facility could have on the local economy.

“This will be a $100 million-plus project that will translate directly to the tax base with the school district benefitting heavily,” he said.

The life of the project is considered to be 25 years and in that time, Imlay City Schools is expected to see the most in new tax revenues at $2.89 million. That equates to about $115,600 per year. Lapeer County is estimated to receive $1.66 million over 25 years, followed by the Lapeer County Intermediate School District at $1.28 million.

Orion estimates that during the project’s construction phase, 80 jobs will be created. In the longer term, the solar facility will support seven jobs.