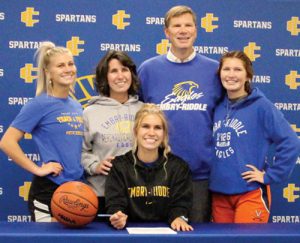 Imlay City’s Mary Lengemann signs her letter of intent as her sisters Ana (L) and Lily (R) plus parents Julia and Bill look on.

The Division 2 school is located in Daytona Beach, Florida.

She attracted their attention with a strong junior campaign which saw her rank as the top scorer among Tri-City players, averaging 19.2 points per contest.

She was also named the BWAC’s MVP.

With her help, Imlay City won the BWAC, a Division 2 district and regional title (the first in school history) and secured a quarterfinal appearance (where the team bowed out with
a narrow 45-40 loss to Detroit Country Day).

Imlay City concluded the 2021 campaign as owners of a 15-4 overall mark.