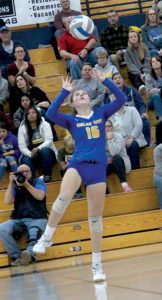 “It was an exciting competitive semifinal,” Imlay City Coach Rachel Van Dyk commented. “It is always tough to lose in the playoffs, especially in a five-set tiebreaker, but I was very proud of our team’s effort and resilience throughout the match,” she noted.

“They have improved a lot over the course of the season and have worked extremely hard. We are excited to train in the offseason to prepare for next fall.”

Jaya Forti handled the bulk of Imlay City’s playmaking responsibilities against Goodrich. She was credited with 40 set assists.