Madison Heights Bishop Foley is where the action unfolded.

With the outcome, Warren Michigan Collegiate improves to 9-2 overall. Almont watches a 6-5 season reach an endpoint.

“We ran into a very physical and fast football team in Michigan Collegiate tonight,” Almont Coach James Leusby said. “I have a feeling that they will be making a deep run and could potentially make it to Ford Field,” he noted. 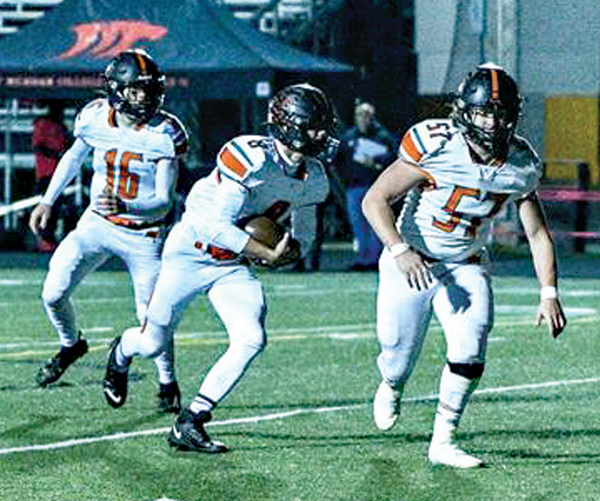 Almont’s Blake Bunch follows the block of Gavin Peake after taking a handoff from Brock Conger in Friday’s football game.

“Despite the result tonight, I am proud of our kids and especially our seniors that have done so much for us this year. We battled injuries and illness for much of the season, but still managed to tie for second in the BWAC and a won a playoff game. That was evidence of their hard work.”

Almont, which was making their 12th straight state playoff appearance and 15th over a 16-year stretch, spotted Warren Collegiate a 16-0 advantage after one quarter was over with.

Quarter two would see Warren Collegiate pad their cushion some. It was there they struck for 28 points and Almont managed six, leaving them up 44-6 at the halftime break.

That was followed by a scoreless third quarter of play.

Almont then bounced back with an 8-0 fourth quarter rally, only to drop a 44-14 verdict when the final score was added up.

For the night, Conger completed eight of 13 pass plays for 120 yards as Almont’s quarterback. He threw four interceptions en route to those numbers.

The Almont ground attack wound up with 42 yards on 16 totes.