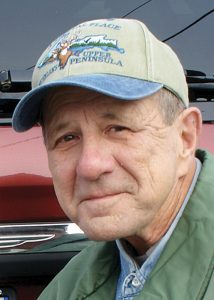 Melvin “Ernie” Mrozek, age 79, of Attica, MI died Monday, November 8, 2021 at Whispering Pines Adult Foster Care of Lapeer, MI. Melvin Ernest Mrozek was born October 23, 1942 in Detroit, MI. He was the son of the late Henry and the late Estelle (Stanulewicz) Mrozek. Ernie grew up in Detroit, MI. He attended George Ford Elementary and was a graduate of George Ford High School in Detroit, MI, Class of 1960. He married Margaret Garda Kifer on March 30, 1963 in Detroit, MI. Ernie and Margaret moved to the Attica area in 1975.

He proudly served in the United States Navy during the Vietnam War from 1961-1965. While in the Navy, Ernie was a photographer in the Antarctic. Ernie was on the cover of the Tri-City Times on November 21, 2012 when Tom Wearing highlighted his work in Antarctica and his Naval photography which captured a Thanksgiving football game on the South Pole on November 22, 1962. He was employed as a tool and die maker by Mold Masters in Imlay City, MI. Previous to working for Mold Masters, Ernie was employed by Metamora Products.

Ernie was preceded in death by his parents, Henry and Estelle Mrozek; and his brother, Henry Mrozek.

Please be sure to sign the online register at muirbrothersfh.com to share condolences and memories with the Mrozek family.