From Capac to our nation’s capital 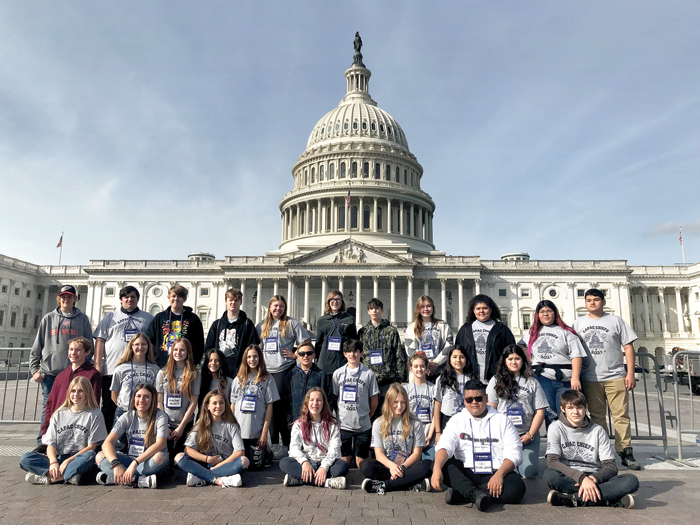 Capac Jr. and Sr. High students pose for a photo in front of the U.S. Capitol building during their trip to Washington, D.C. in late October.

CAPAC — May 2020 is when a group of Capac students were originally scheduled to board a bus and head to the nation’s capital. Due to the pandemic that memorable trip was delayed 17 months but students finally got their chance to see Washington, D.C. and other historic places last month.

Teacher Mary Sokacz said the trip was originally open to 7th and 8th grade Student Council members and all year honor roll students but because of the delay, the roster changed from those who had originally signed up.

“There were current 10th graders, who were 8th graders at the time, that hung strong and stayed enrolled knowing it would still probably be the best opportunity to go to our nation’s Capital. About half of the original participants who were signed up stayed on and we filled the empty seats with eligible current 7th graders,” Sokacz said.

Student Adam Schaefer said the first day of the trip entailed “driving a very long time” and making their first official stop at the Dobbin House in Gettysburg, PA where they had breakfast and toured the historic home, built in 1776, and its connection to the Underground Railroad.

From there the group headed to the Gettysburg National Military Park.

“It was bigger than I expected,” said student Bryce Day.

“We got on and off the bus to see different sites as part of the tour. At one stop we stopped to see and learn more about cannons and how they worked.”

Orlando Guerrero said he was struck by how “calm” the park was.

The Capac tourists concluded the day with dinner and a show at Medieval Times in Baltimore that night.

On day 2 of the trip, the group visited Fort McHenry in Baltimore where Francis Scott Key was inspired to write the National Anthem. Then everyone laced up their walking shoes and logged 12 miles in Washington, D.C. where they visited nearly all the memorials and monuments within the National Mall, plus the U.S. Capitol building, the White House and Arlington National Cemetery.

Students Adam Schaefer, Shay Schaefer, Emalie Roberson and Bryce Day were selected to participate in a wreath laying ceremony at the Tomb of the Unknown Soldier.

Visiting Arlington was the highlight of
the trip for Brody Tesnow.

“It was really cool to see the gravestones of the soldiers lined up perfectly and visiting President John F. Kennedy’s gravesite was really interesting. Seeing the view from that location, you can understand why he wanted to be buried there,” Brody said.

On the third day, the students and chaperones visited the Jefferson Memorial and many of the captial’s museums, and Ford’s Theatre—the site of President Abraham Lincoln’s assassination—before heading to Luray Caverns in Luray, Virginia.