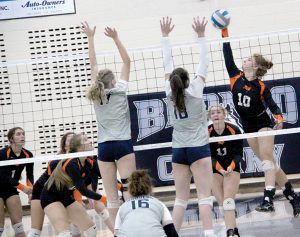 Almont’s Molleigh Rinke looks to hit her shot over a pair of North Branch blockers in a Div. 2 district volleyball encounter last Wednesday.

Grace Koenig directed Almont’s offense from her position at setter. She was credited with nine assists.