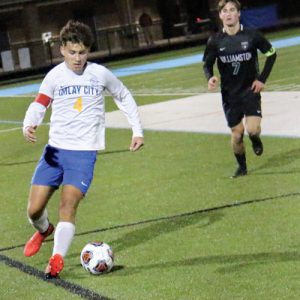 Luis Barragan, of Imlay City, seeks out an open teammate during regional action.

Lansing Catholic High School is where the match was contested.

“It was also our second straight district and fifth straight league title. Our team has a lot to be proud of. We would like to thank our sponsors (Jalisco’s, Botanas El Plaisa, StudioE Photography and Vlasics) as well as our fans for all their support. Our Spartan program promises to come back stronger next year.”

In Tuesday’s meeting, Williamston struck first when a shot found the back of the net with about 10 minutes showing on the first half clock.

The remainder of half number one was scoreless.

When the action resumed, Imlay City bounced back with a goal by Alan Olmedo to make it 1-1. There was now 38:11 remaining during half number two.

It appeared as if the contest would go down to the wire, or it least it seemed that way at the time.

Instead, Williamston responded to the challenge presented them with a 3-0 outburst over the next five-minute stretch, That staked them to a 4-1 advantage.

Quintin Ramirez went the distance in net for Imlay City. Ramirez was credited with seven saves.