ALMONT — Almont (6-4) will look to continue their postseason path a bit longer when it collides with Warren Michigan Collegiate (8-2) in a Division 6, Region 4, District 1 football championship confrontation this Friday.

The battle, which is scheduled for 7 p.m., unfolds at Madison Heights Bishop Foley High School.

Almont, which tied Armada and North Branch for second in the Blue Water Area Conference, enters the fray coming off a 35-0 road win at the expense of Clawson. 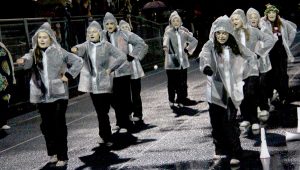 The Almont cheerleaders cheer on the Raiders to a Division 6 playoff win last Friday in Clawson.

Prior to that matchup, Almont prevailed in five of nine clashes. That run saw them drop a 25-0 road verdict to non-league foe Monroe St. Mary Catholic Central; obtain a 43-7 road victory over league counterpart Yale; register a 39-0 triumph against conference rival Imlay City at home; notch a 40-0 road win over league adversary Algonac; fall 20-14 in overtime to conference foe North Branch on the road; drop a 41-7 outcome to league counterpart Cros-Lex at home; prevail 14-7 over visiting conference rival Armada; secure a 39-29 road victory over league foe Richmond; and absorb a 51-28 loss to non-league adversary Goodrich at home.

Almont Coach James Leusby is well aware his team’s upcoming test will not be an easy one.

“Warren Michigan Collegiate is a well-coached team with lots of size and speed,” Leusby commented. “They have played a tough schedule like us,” he noted.

“We hopefully will have a great week of practice and get a little healthier. It should be a great game to come out and watch.”

The victor of the Almont versus Warren Michigan Collegiate matchup will play the winner between Ecorse (7-3) and Detroit Southeastern (7-3) the following week.