On October 23 and 24, volunteers came together to help build the newly delivered playground equipment.

Andy Roosa, park board chairperson said, “The volunteers helped save $13,000. It would have been $15,000 for installation by the company.” Instead, the company sent supervisors to instruct and assist, for a cost of $2,000. The supervisors were required to be on site during the build, for liability and insurance. 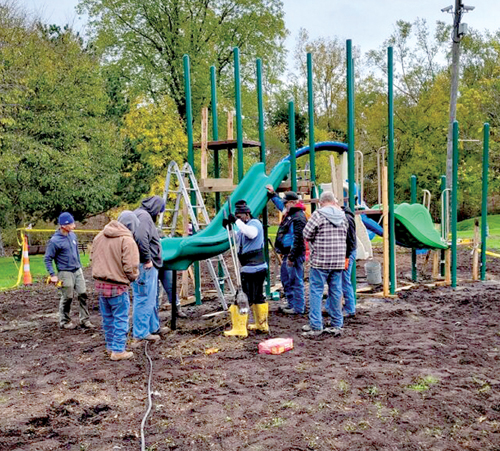 Volunteers spent October 23 and 24 assembling the new equipment at the Almont Community Park.

Volunteers were given lunch which was generously donated by Aleck’s Transportation. Owners Jim and Erin Aleck were happy to donate time and food to the volunteers. Erin even cooked up some homemade chili to feed all of the helpers. For a special treat, The Almont Baking and Donut Co. donated donuts both days which paired perfectly with cider donated by the Almont Lions Club.

The park board was also given approval to add new mulch and a new border to the playground area. The border has not yet arrived, so both will be installed at a later date. The park is currently closed.

The design for the new park was a collaborative effort after a few meetings with members of the community. The park board asked residents to vote on designs, needs, and wants for future park features.

“We are really listening to the people and giving the community what they want,” Roosa said.

Due to financial constraints, the park board used the votes to develop a plan. Aside from a new playground, the park board is working on adding a natural path that will follow along the outside of the park. In addition to all of this, a BMX park is being developed on the opposite side of the river. Roosa said that a group of kids has been working hard to build this already, and the park board plans to work on the project to bring it to code. Currently, a portion of the area the children were building on is owned by a resident. The board is working with the resident on a land use contract. The area leading to the BMX park and the area around the river has been cleared.

Roosa shared that other ideas from residents included a splash pad and a skate park. Due to the expense of those options, these items had to be sidelined, but are not completely out of the question. The board will continue to research options such as grants to hopefully make these ideas a reality at some point.