Chamber Board decides to not host another Busker Fest 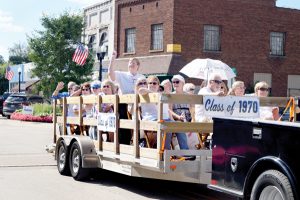 The Imlay City High School Class of 1970 waves to the crowds during the Sesquicentennial parade in August as it traveled down Third Street.

IMLAY CITY — The Imlay City Area Chamber of Commerce Board of Directors is planning to change the name of Imlay City’s annual summer festival.

Chamber Director Shannon Hamel reported that while some members preferred to host another “Michigan Busker Fest” in 2022, the majority wanted to change the name of the festival.

On Tuesday, Nov. 2, Chamber President Rob Mette said members were presented a list of festival names, including three that emerged as strong possibilities.

In 2018, the Chamber Board made a decision to supplant the city’s traditional Blueberry Festival and replaced it with a Michigan Busker Festival.

At the time, Chamber Board members felt that the Blueberry Festival had lost some of its former luster, and decided to make a change.

“We thought that the community would support the festival no matter what,” Mette recalled. “Unfortunately, we experienced a decline in attendance and community support and participation.”

Mette hopes that a new name, that reflects all aspects of the community, will result in increased community support and participation.

He added that the new name could be announced soon.

In August of 2021, the Chamber and Downtown Development Authority teamed up to organize Imlay City’s Sesquicentennial, a celebration of the city’s founding 150 years ago. The 150th celebration was originally set to be recognized in 2020 but was delayed by a year due to the pandemic.