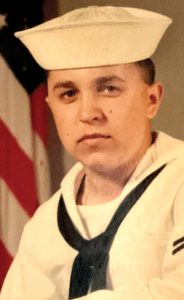 Gerry is survived by three older sisters, Sylvia, JoAnne and Virginia, and three younger sisters, Annette, Kathryn and Margaret, as well as many nephews, nieces, cousins and friends.

Gerry graduated from Capac High School in 1967 and then honorably served four years in the United States Navy, mostly on the aircraft carrier U.S.S. Franklin D. Roosevelt. Coming home from the Navy, Gerry was employed at Firestone and TRW, becoming an apprentice tool and die maker and then earning a degree from Macomb Community College. After retirement, he was happiest at his home with his daily routines, going out for coffee, getting his mail at the post office and visiting friends. Most recently, “Kitty,” the stray cat who found him, made him smile every single day.

Gerry was clear that he did not want a funeral. He will be remembered nonetheless. After cremation, he will be laid to rest with our parents in West Berlin Cemetery. Rest in peace, brother.