ALMONT — The Almont varsity football team kicked off what they hope will be a lengthy postseason run, earning a 35-0 win at host Clawson’s expense in a Division 6, Region 4, District 1 district semifinal playoff game last Friday night.

With the outcome, Almont (6-4) advances to this Friday’s district championship clash versus Warren Michigan Collegiate (8-2) at Madison Heights Bishop Foley High School. That matchup lists a 7 p.m. starting time. Clawson ends their season as owners of a 7-3 mark. 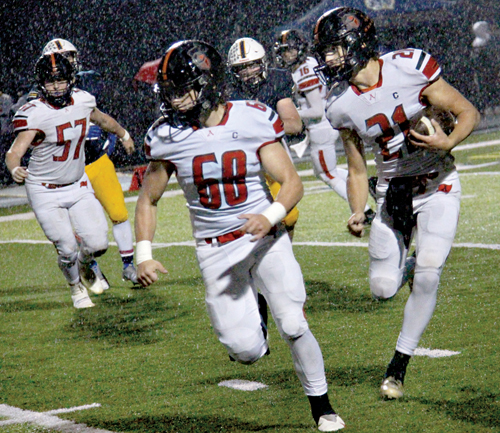 “We did what we set out to do by controlling the ball and controlling the clock,” Almont Coach James Leusby said. “It was difficult for Clawson to get anything going on offense when we had the ball for most of the first half,” he noted.

“I’m proud of our kids for battling through the weather and getting the job done. Despite the wind and rain, we had another great crowd travel with us and we appreciate that more than we can express. We will have our work cut out for us regardless of the next opponent.”

In Friday’s game, Almont and Clawson would end the initial quarter with zero points each.

The next 12-minute stretch would see Almont amass 21 points, while holding Clawson to none.

When the action resumed, Almont picked up where it left off. Aided by a 7-0 third quarter edge, the Raiders widened the gap to 28-0 with 36 minutes gone.

Almont then outscored Clawson 7-0 the rest of the way, closing out a 35-0 win.

On the night, Conger completed two of three pass plays for 39 yards as Almont’s quarterback. He threw zero interceptions en route to those numbers.

The Almont ground attack chewed up 301 yards of territory on 51 totes.