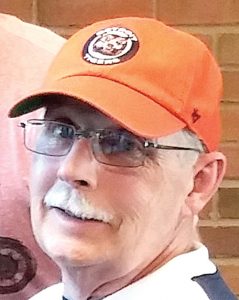 Vincent “Vince” Famularo Jr., age 74, of Imlay City, MI died Saturday, October 23, 2021 at his home surrounded by his loving family. Vincent Joseph Famularo Jr. was born May 22, 1947 in Detroit, MI. He was the son of the late Vincent Sr. and the late Lorraine (Plumley) Famularo. Vince grew up in Grosse Pointe Farms, MI. He was a graduate of St. Paul Catholic High School, Class of 1965, located in Grosse Pointe, MI. During high school, Vince was involved in swimming and football. He worked as a lifeguard at the Grosse Pointe Yacht Club. Vince continued his education at Wayne State University where he earned his Bachelor’s of Science in Special Education and his Master’s degree as an Education Specialist in Administration. He married Kathryn Pittenger on June 19, 1971 in Grosse Pointe, Michigan. Vince and Kathy moved to Imlay City, MI in 1977. He was preceded in death his wife, Kathy, on April 25, 2017.

Vince started his career in the self contained classroom for two years. He quickly transitioned as the principal at the Macomb County Youth Home where he worked for 35 years. During that period of time he also took on the role as the Director of Special Education for L’Anse Creuse Public Schools for three years, before retiring. Vince was a member, usher, and on the church council of Sacred Heart Catholic Church of Imlay City, MI and a member of St. Cornelius Catholic Church in Dryden, MI. He was also a member of Our Lady Queen of Peace Knights of Columbus in Imlay City. Vince was a past president of the Imlay City Community Schools Board of Education; participated in the leadership of Imlay City softball leagues and was a little league coach. He loved to go to Disney World and camping in his motorhome with his grandchildren. Vince enjoyed reading, hunting birds, deer hunting, fishing and golfing.

Those wishing to make memorial contributions may direct them to Four County Community Foundation or the M.S. Foundation.

Please be sure to sign the online register at muirbrothersfh.com to share condolences and memories with the Famularo family.