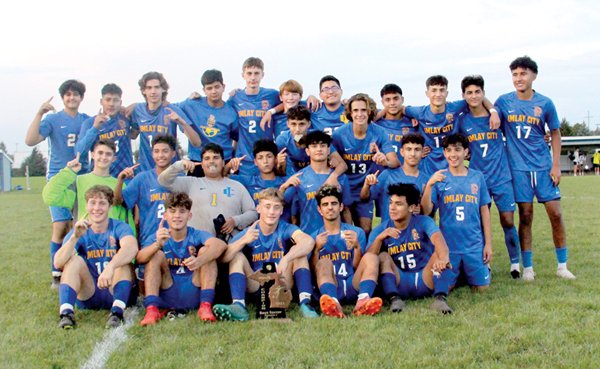 The Imlay City boys’ soccer team takes time out for a picture after registering a top finish at a Division 3 district it hosted last Wednesday,

IMLAY CITY — Sixth-rated Imlay City saw to it their season would continue a bit longer, accomplishing the feat with a 4-0 triumph against visiting Richmond in a Division 3 boys’ district soccer title encounter last Wednesday.

It marked the second straight year Imlay City has earned the distinction of regional champions.

With the outcome, Imlay City raises their mark to 21-3-1 this season.

In Wednesday’s encounter, Imlay City bolted out to a 4-0 advantage after one half was over with.

That was followed by a scoreless second half of action, leaving Imlay City up 4-0 when the final second ticked off the clock.

Quintin Ramirez and Omar Lopez each took a turn in net for the winning Imlay City side. They were credited with three saves each.