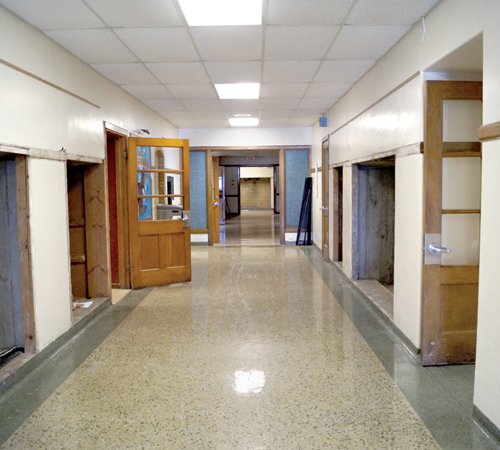 A view of the upstairs hallway in the original section of the building. One of the buyers, Ryan Kersten, said they are still working on plans to transform the former school into senior apartments.

CAPAC — Earlier this month the sale of the former middle school was finalized and details of the transaction have been made public.

Jeff Kegler, Greg McConnell, Ryan Kersten and Chris Nanni are the purchasers of record. According to Capac Schools Supt. Jeff Terpenning they paid $290,000 for the school and the property it sits on, plus $25,000 for a parking lot directly across from the school on the east side of Neeper Street.

“We’re excited to do this,” Kersten said of the buyers’ plans to turn the former school into apartments for senior citizens.

“We’re still working on the actual plan and we hope to have a timeline of how things will progress in the next couple of weeks.”

Kersten notes that McConnell and members of Kersten’s wife’s family undertook a similar project in Yale—transforming a former school into a senior living facility—and they’ve been eager to do it again.

“We’ll duplicate what we did in Yale but with a modern touch,” Kersten added.

The school district officially listed the original 1930s era building with various additions for sale in early 2021 and announced a purchase agreement had been reached in May with the school board selecting the highest bid from the four submitted.

In July, the village’s planning commission and council approved a request to rezone the Neeper St. property from single to multi-family housing. The owners will need to
submit a site plan to
the planning commission before major work can begin on the building.

The former Middle School has been mostly vacant since middle schools classes were moved to the elementary and high schools in 2016 as part of a reorganization plan. The building was opened to the public last month for tours just before the sale was finalized.

On behalf of the school district, Terpenning thanked the village for working together to make the sale a success.

He said the school board was due to discuss how they would use the sale proceeds at their meeting last week. Terpenning’s suggestion was to direct the money to their capital projects line item.