Racing to the record books

Racing is nothing new to the 14-year-old Dryden resident. She’s been behind the wheel since she was just five when she started racing in quarter midget contests. She loves the sport and could see herself continuing down the racing career path if that’s where life takes her. 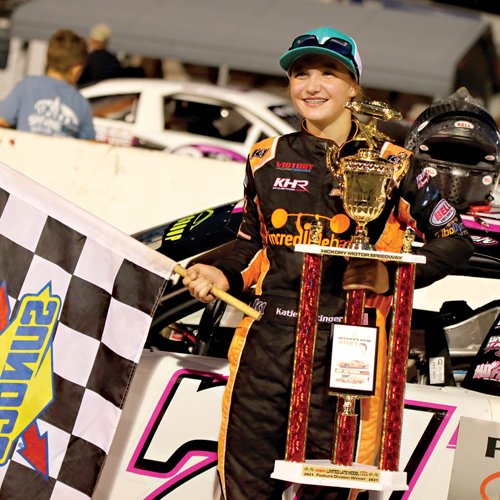 Dryden’s Katie Hettinger made history last month, becoming the youngest female ever to win a race at the Hickory Motor Speedway in Newton, North Carolina.

“It’s a very expensive sport, so it really depends on what the future holds,” Katie said.

While she’s done for this season, she plans to start back up in 2022. For now, Katie is home, playing on Almont’s varsity volleyball team and focusing on school.

“Katie’s family used to live next door to me. I used to freak out when she was little, like 6 years old driving 30 miles an hour. Her pink car had Hello Kitty and ‘bye bye boys’ on it, so they would see it as she passed them,” Melissa said.

“She attended her first race at four weeks old to watch her dad and really grew up at the races. Her dad, Chris, always envisioned his kids racing Quarter Midgets (QM) like he and his Dad did, so he always talked to Katie, the oldest of our three kids, about racing. When Katie was 5 we took her to a QM track’s ‘test drive’ session in Waterford. She loved it and we then bought a car and started racing that winter in an indoor series down in Columbus, OH,” Jessie said.

Racing seems to be in Katie’s DNA, with her following in the footsteps of her dad and grandpa.

“Her kindergarten teacher, Mrs. Jones, asked her where she learned how to drive like that after I shared some pics and videos of a recent race with her back in 2012. Kate’s response was, ‘I was born to do it!’” Jessie said.