GOODLAND TWP. — On Monday, Oct. 25, the M-53 Corridor Committee met for the first time in four years at the Goodland Township Hall.

Many in attendance were hoping to hear news of upcoming MDOT projects that could alleviate traffic congestion and backups, while increasing the public safety along the section of highway from Romeo to points north.

Instead, they were informed during a conference call with MDOT officials, that there are plans for such projects but not until 2025 or 2026.

Corridor Committee member Jim Ligon, who served as moderator, asked audience members to share their concerns and pose questions to the MDOT officials.

Some wondered about status of installing a traffic signal at the corner of M-53 (Van Dyke) and E. Borland Rd. in Imlay City.

In recent years, Imlay City managers Tom Youatt and Craig Horton have fought for a signal at that location for the public safety.

Thus far, every effort has failed because the intersection does not meet MDOT’S criteria for installation.

Those in attendance on Monday included Horton and Imlay City Police Chief Brett Selby, who insisted something needs to be done soon.

“Any accidents that can be prevented by posting a light there would be worth doing,” said Selby, who noted the frequency and seriousness of accidents taking place in front of the Kroger Plaza. “I’m seeing a lot of people being transported to hospitals.”

MDOT representatives said they were aware of the problem and have proposed that a boulevard be constructed at the location in 2026.

“Everything is getting bottlenecked three miles south of Almont, which is forcing motorists and semi-drivers to seek alternate routes, including taking backroads not designed to accommodate such vehicles or traffic flow.

“It’s good to see that you’re listening, but it suggests a lack of foresight on the part of MDOT, for not planning for this.” 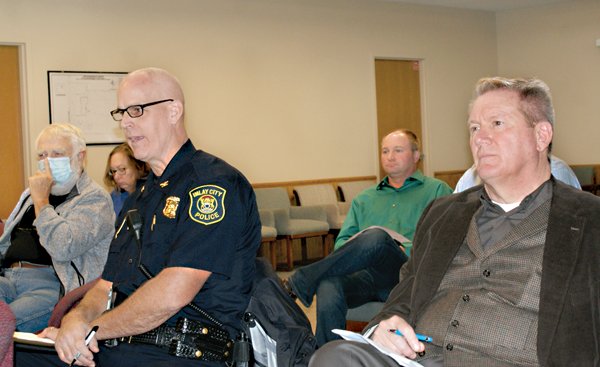 MDOT officials admitted they were not prepared for what they are seeing in increased traffic flow along the M-53 corridor. They said they understood the concerns voiced but stated that upgrades are driven by existing financial conditions and other projects that have been scheduled.

State officials also pointed out that a significant amount of money has been going toward interstate and freeway projects, including along I-69, adding that available dollars need to be used to meet their current strategies and plans.

After the meeting, Imlay City Manager Craig Horton offered his take on the discussions.

“Both Chief Selby and myself feel that the safety of the residents of Imlay City and visitors are of the utmost importance,” Horton said. “We will continue to attend any and all meetings where we can make that case to MDOT or any other agency or group.”

He added that a traffic signal at Borland Road and M-53 remains at the top of his list for public safety.

Horton said most recent traffic counts revealed that 15,800 motorists travel between Imlay City and Almont on a daily basis, while 19,600 vehicles pass through Imlay City each day.

He noted that the state authorized a traffic light at Dryden Road and M-53 to accommodate 15,800 motorists.

However, MDOT insists that placing a traffic signal at Borland and M-53 in Imlay City would be considered an illegal installation.

“We have raised this issue in multiple prior meetings with MDOT,” Horton said. “Their only answer is that they have a requirement list that must be met prior to authorizing any new traffic light.

“We will continue to make our case with the state in hopes of convincing them of the true public safety concerns we have.”