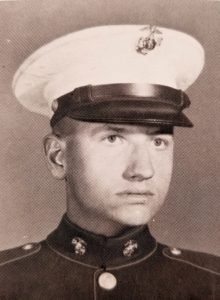 John was born in Cass City, MI to Homer and Josephine Conrad and raised in the Capac area. He joined the Marines and served his country for four years. He remained proud of his military service. In 1973 he met and married Linda Lloyd. They raised their sons Gordon and Ben in Rosebud, MT. He lost his beloved wife, Linda, in 2006. In 2010 he moved to Elko, NV to be closer to his sons. After a stroke in 2016 he moved into The Highland Manor in Elko.

He is proceeded in death by his wife, Linda; his son, Gordon Conrad; his parents, Homer and Josephine, his sister Jeanette Ziegler; and his brother Edward Conrad.

John’s ashes will be placed in the Rosebud, MT cemetery at a later date.

Thank you for your Service Pops. R.I.P.