Imlay offense too strong for Southwestern

With the decision, Imlay City finishes at 2-7.

“This was a solid overall and team effort and a great way to send our seniors out on a high note,” Imlay City Coach Brian Tresnak said. “We are proud of how these guys keep fighting week after week and are always trying to improve and find positives,” he noted. 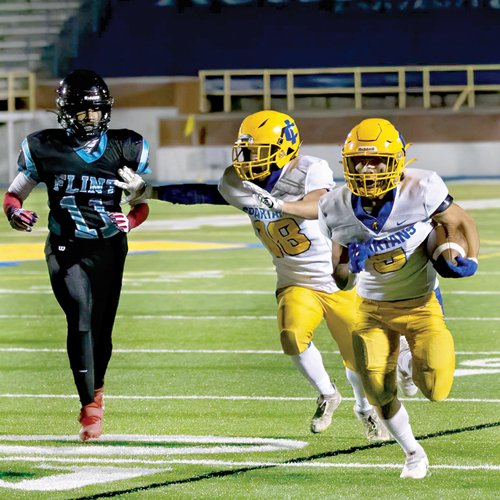 “This senior class has done a good job of setting up the future for this program. I look forward to seeing the underclassmen take the reins next year.”

In Friday’s contest, Imlay City jumped out to a 19-8 advantage after one quarter was done and widened the gap to 26-8 at the half.

When the action resumed, Imlay City continued to pull away. Aided by a 7-0 third quarter edge, the Spartans increased their cushion to 33-8 with 36 minutes gone.

Imlay City then outscored Flint 9-0 the rest of the way, closing out a 42-8 win.

For the night, Burgess completed two of five pass plays for 25 yards as Imlay City’s quarterback. He threw two interceptions along the way.

Brady Vanderploeg was the other Imlay City player who opted to air out the football. His lone attempt went for a 29-yard completion.

Julian Rojas (two for 43 yards) and Vanderploeg (one for 11) had Imlay City’s catches.

The Imlay City defense also wound up with four takeaways that evening. Danny Newsom (two interceptions) along with Julian Rojas and Dalton Sands (a fumble recovery each) contributed those.