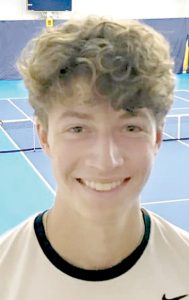 Later that day. Bussone improved his tournament standing to 2-0 on the strength of a 6-4, 2-6, 6-4 victory over Hudsonville Unity Christian’s Ryan Broek, the fourth seed.

That landed him a quarterfinal assignment Saturday versus Brooklyn Columbia Central’s Daniel Pero, who was seeded fifth. It was there he bowed out with a 4-6, 2-6 setback.