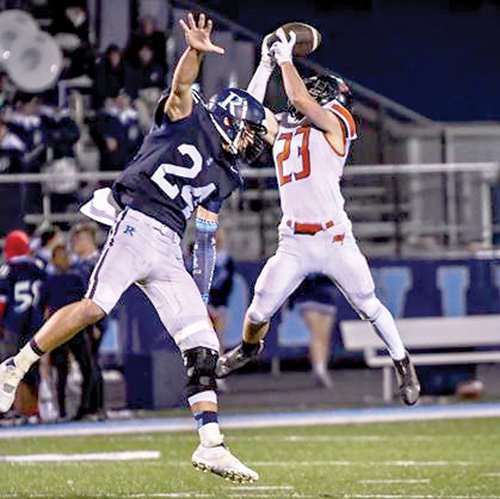 “It was a crazy night with a delay due to the lights going out and rain during most of the first half,” Almont Coach James Leusby commented. “The kids had to fight through a week with almost everyone being sick but they got the job done,” he noted.

“Our fans travelled well despite the weather and helped us through another tough game. I am proud of the way we finished our BWAC schedule with two wins against two of our rivals. Now we have to get healthy and finish strong going into the playoffs.”

In Friday’s encounter, Almont spotted Richmond a 7-6 edge after one quarter was over with.

Almont then fought back with a 12-7 second quarter advantage, going up 18-14 at the half.

When the action resumed, Richmond struck with a 9-7 third quarter edge. That made it 25-23, Almont, with 36 minutes elapsed.

On the night, Conger completed was zero of one passing as Almont’s quarterback.

The Almont ground attack wound up with 410 yards on 44 totes.

The Almont defense also registered a pair of takeaways. Jacob Fuller and Measel (an interception each) furnished those.