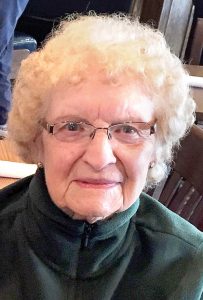 Leota Skwirsk, age 86, of Imlay City, MI died suddenly, Friday, October 15, 2021 at her home. Leota Joyce McLean was born October 31, 1934 in Almont, MI. She was the daughter of the late Stanley and the late Ida Mae (Meredith) McLean. Leota (known by her family as Oak) grew up in Capac and Almont and lived most all of her life in Imlay City. Leota was a graduate of Imlay City High School, Class of 1953. She worked as a sales clerk at Smith-Bridgman’s store in Flint for a few years when she was quite young. She married the late Joseph Leo Skwirsk on April 4, 1959 in Lapeer, MI.

Leota also worked at Tietz Family Restaurant in Imlay City for many years; then she took on a housekeeping job at Casa Maria Senior Living Facility (later to be Sanctuary at Maple Vista) in Imlay City, having worked there for 30-plus years. Oak loved to clean and move her furniture around, playing card games, she was an avid sports fan (especially of her grandchildren and of the Tigers, Lions, Pistons and Red Wings).

Please be sure to sign the online register book at www.muirbrothersfh.com to share your memories and condolences with the Skwirsk family.