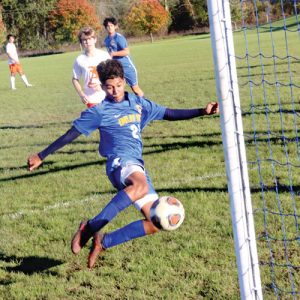 Dilan Garcia, of Imlay City, looks to put the ball in the net during Monday’s district soccer encounter versus Almont.

With the outcome, Imlay City improves to 20-3-1 overall.

Quintin Ramirez drew the goalkeeping assignment for Imlay City. He finished with one save.

Bain Abitheira handled the goalkeeping chores for Almont. Abitheira was credited with 15 saves.