Champion to close after 40 years

IMLAY TWP. — A components shortage is being cited as the reason for Champion Bus’ permanent closure. 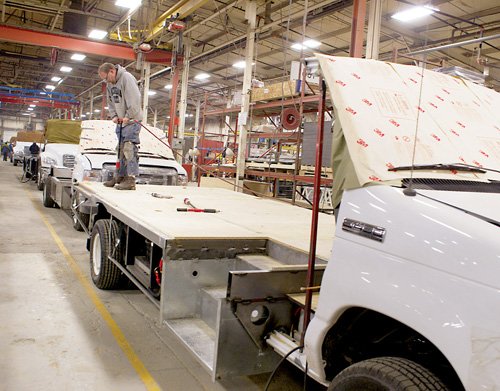 The facility on Graham Road was heavily damaged in a 2010 fire but the company opted to add on to an existing building and continue production. The 194,000 square foot building sits on 73 acres and Forest River says they will likely sell those assets.

David Wright, president of Forest River’s bus divisions, said the ongoing shortage of bus chassis within the automotive industry was the sole reason for shuttering the plant which will impact about 100 jobs. As a result, all operations in Imlay Twp. will be consolidated and moved to Forest River’s existing facilities in Elkhart, Indiana.

“The Champion brand is not going away. The demand is fantastic for the product,” Wright said.

“Chassis availability is driving the whole decision. We are getting less than 50 percent of the chassis we need on a monthly basis.”

He confirmed that a portion of the plant’s workforce was laid off in early summer due to the supply issue. Those that are willing and able to move are being encouraged to consider relocating to Elkhart County, Indiana where there are many job opportunities, particularly in Forest River’s recreational vehicle division. In addition to RVs, Forest River also makes cargo and utility trailers and pontoon boats. The company’s headquarters are in Elkhart.

“We will likely be putting the facility up for sale,” Wright said of the 194,000-plus square foot building and property encompassing 73 acres.

According to the brand’s website, the plant was making five different shuttle bus models.

Last year, Champion Bus was sold by REV Group to Forest River, a Berkshire Hathaway subsidiary for an undisclosed amount. ElDorado Bus, the other REV group brand acquired by Forest River at that same time, saw it’s Salina, Kansas plant shuttered in May of this year. According to media reports, the company said then the closure was due to a reduction in business caused by the pandemic. A portion of that brand name’s production was moved to Imlay City. Once the Champion facility closes in Imlay Twp., all of Forest River’s remaining bus manufacturing will be centralized in Elkhart and Goshen, Indiana.

At the time of the acquisition, Forest River had high praise for Champion and ElDorado’s “historic and iconic brands.” According to prior reporting by the Tri-City Times, the company was founded as Champion Home Builders in 1953 and entered the commercial bus business in 1981. Thor Industries purchased the business in 1988 from Champion Enterprises of Auburn Hills. Since then Champion Bus has had several different owners.

In February 2010, a devastating fire damaged a large portion of the facility’s north manufacturing building. When the company decided to rebuild and put a 90,000 square foot addition onto the south manufacturing plant, they applied for and received an industrial facilities tax (IFT) exemption from Imlay Twp.

Per terms of that agreement Champion was given a 12-year, 50 percent tax abatement and in return, agreed to create 50 full-time jobs at an average wage of $16 per hour and maintain an annual average of 263 full-time employees in the first two years of the agreement. That IFT is due to expire this coming March.