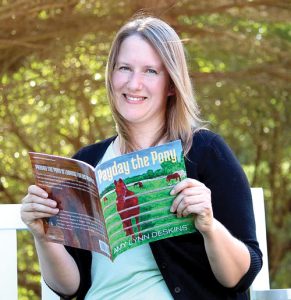 ALMONT — Words, writing, books—they’ve all played a big role in Amy Deskin’s life. Now the Almont resident can add “author” to that list.

Amy wrote and illustrated “Payday The Pony” and is now selling copies of the children’s book.

“I have wanted to write a book for as long as I can remember. I was always writing, even as a kid,” she said.

Amy didn’t have to search far for her inspiration since it came in form of one of her four-legged companions, Payday.

“I have owned Payday for 13 years, and we have gone through a lot together. I thought, what fun it would be to tell some of his story to the world,” she said.

She started devoting her time to getting the book published just over a year ago. With the story fine-tuned, she began exploring her options for adding illustrations but eventually decided to do them herself and made the finishing touches with help from her publisher Outskirts Press.

“Now that it is published, I am amazed at how many people have come out to support me and my little pony book. I’m feeling the love from friends, family, kids, adults, and horse enthusiasts,” she said.

The story, tailored to readers and listeners ages 3-7, starts with Payday’s birth and his subsequent quest to find his place in the barn, presuming he would follow in either of his parents’ paths.

“He tried the best he could to copy their successes, not realizing his own hidden talent until he was forced to face an unexpected obstacle,” the book’s description reads.

“This story teaches the importance of perseverance and trying different approaches while chasing a dream.”

Since copies became available, Amy has donated “Payday the Pony” to her daughter’s teachers at Orchard Primary along with the Almont Library. In the near future Amy hopes to host some book readings. Last month she sold copies at the Almont Heritage Festival along with a free bookmark craft and did the same earlier this month at the VC Farm and Fiber Fall At the Farm event.

As an enthusiastic reader in her early days, Amy wants to inspire others to fall in love with books too.

“As a kid, I loved reading, to the point that I was getting in trouble in school for reading too much. I couldn’t get ahold of enough reading material. My favorite series were definitely The Babysitter’s Club, The Saddle Club, and the Thoroughbred series, which was about racehorses and jockeys, although I would pickup pretty much any book. In high school I was reading the senior required Shakespeare plays as a sophomore just for fun,” she said.

Amy hopes her first published book is just the beginning.

“I would love to make Payday the Pony a children’s series, like my daughter’s favorites Pete the Cat, Biscuit, and Dragons Love Tacos. I already have some ideas, and a bit of the writing done, so we will have some more Payday adventures to look forward to in the near future,” she said.

“Payday The Pony” can be purchased online through Amazon and other booksellers.