ALMONT — The Almont girls’ golf team claimed a 16th-place finish at the Division 4 state finals this past week.

“The girls completed an amazing year with their trip to the state finals,” Almont Coach Mark Bone commented. “I thought we played very well since it was the first trip to the finals for this group of girls,” he noted. 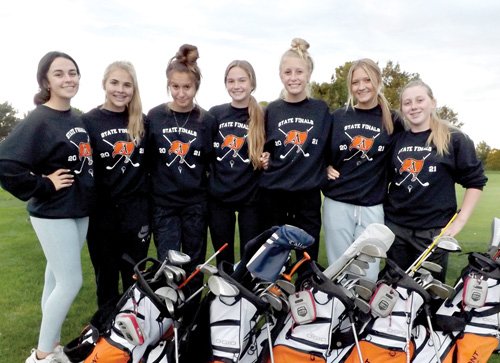 Bella Moussiaux had the next best Almont output, posting a 214. Moussiaux generated an opening round 109 and a closing round of 105.

Taylor Garabedian ranked third among Almont golfers at the state finals. She managed a 227 total, starting things off with a 103 and finishing with a 124.

Olivia Kotelnicki rounded out Almont’s top-four totals, carding a 255. Kotelnicki opened with a 123 and closed with a 132.

Lillian Winkler and Autumn Bletch also represented Almont at the state finals. Winkler posted an opening round 114 and Bletch chipped in a second round of 144.