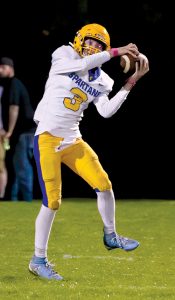 Jacob Burgess, of Imlay City, hauls in a catch during his team’s clash with Yale last Friday night. Photo by Rod Soule

“Offensively we need to find a way to sustain drives,” Imlay City Coach Brian Tresnak said. “We had too many three and outs, dropped passes and fumbles tonight,” he noted,

“Defensively we had too many costly mistakes on third down.”

In Friday’s game, Imlay City spotted Yale a 14-6 edge after one quarter was over with.

Yale then outscored Imlay City 10-0 during quarter number two, widening the gap to 24-6 at the half.

The third quarter would see Yale pick up where it left off. Thanks to a 7-0 advantage there, the Bulldogs pushed their cushion to 31-6.

That was followed by a scoreless fourth quarter, leaving Yale with a win to celebrate at night’s end.

On the night, Jacob Burgess completed five of 14 pass plays for 45 yards as Imlay City’s quarterback. He threw zero interceptions along the way.

Lance Wolford was the other Imlay City player who opted to air out the football. His lone attempt went for a 17-yard completion.

Imlay City will look to bounce back this Friday when it travels to North Branch. The Blue Water Area Conference battle is slated to get underway at 7 p.m.