Pudding stone was a teaching tool at center 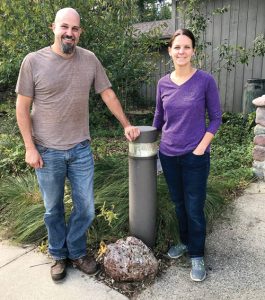 Jeff and Yvonne Rule of Metamora have since donated a pudding stone to replace the one stolen from Seven Ponds.

DRYDEN TWP. — Pudding stones are prized for their unique colors and patterns and they speak to Michigan’s and the Great Lakes region’s geological history. Unfortunately, it appears one of these rocks caught the attention of a Seven Ponds Nature Center visitor or visitors who decided to take it home with them. Seven Ponds staff announced the theft on their Facebook page last month.

Like everything in the center’s collection, their pudding stone was used for education purposes. It was located in the demonstration garden in front of the building and weighed at least 40 pounds, staff said.

“We are a Nature Sanctuary and one part of our mission is to conserve and protect the natural environment of Seven Ponds for the native plants and animals. We teach the children here that if everyone took something from here there will be nothing left for others and for the wildlife,” they said in a Facebook post.

“We are sadden that two individuals did not think to ask us where they can get something similar for their yard, but felt the need to take ours.”

Seven Ponds staff indicated that they had filed a police report regarding the matter and requested that whoever took it be compelled to return it with
“no questions asked.”

Since then, supporters of the center—Jeff and Yvonne Rule of Metamora—have stepped up and donated a pudding stone from their yard to replace the one that was stolen. Seven Ponds said they were touched by their thoughtfulness and generosity.

According to Michigan State University, pudding stones got their name from their resemblance to European settlers’ fruity pudding dishes. Its base is comprised of white quartzite with pebbles of jasper and other dark-colored stones embedded it in.

“In North America, pudding stones are most commonly found across Michigan, around the Ontario peninsula, and less commonly on the surrounding coastlines of the Great Lakes,” the ‘Geography of Michigan and the Great Lakes Region’ MSU course website states.