TRI-CITY AREA — The state’s new redistricting board is deep into examining the boundaries that define voting areas. Although the process is far from over, it appears local voters could see some major changes before they head to the polls in 2022.

In the coming weeks, the Michigan Independent Citizens Redistricting Commission will host town hall meetings and continue to modify the proposed maps for congressional and state senate and house districts. The final maps will need to be adopted by Nov. 1.

As of Monday, October 4, here’s what the commission was proposing for redrawing voting boundaries. 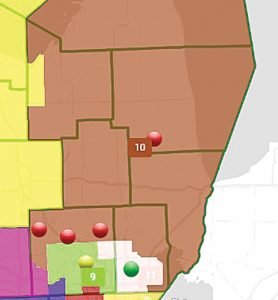 Most versions of a new 10th Congressional District map show the boundaries pushing further south to include a portion of Oakland and more of Macomb counties.

In the Tri-City area, voters in St. Clair County and the 25th Senate District could see relatively few changes. In contrast, Lapeer County could gain some new “neighbors” and a new number if the current 31st district is redrawn as proposed.

Currently the 25th district includes Huron, St. Clair, and Sanilac counties and a handful of communities in northern Macomb County. The proposed change would be to add Tuscola County to this district along with the northernmost townships of Lapeer County—Rich, Burlington and Burnside. Additionally, some of St. Clair County’s most southern communities along with those in Macomb County would be taken out of the 25th. Dan Lauwers, a Republican, has represented the 25th district since 2018.

At present, the 31st district includes Lapeer, Tuscola and Bay counties. The redistricting commission is proposing grouping most of Lapeer County with portions of northern and eastern Genesee County and a large portion of Saginaw County—exclusive of the city of Saginaw—into what would be the new 15th State Senate District.

Kevin Daley, a Republican, has represented the 31st district since 2018.

It appears Lapeer County’s status as constituting one entire House of Representative’s district—the 82nd—could be over. The most recent maps show the group is considering placing most of eastern Lapeer County, western St. Clair County and a portion of northern Macomb County into a new district, either the 47th or 48th. Such a change would also impact other current House districts, including the 81st, which now includes western St. Clair County.

Gary Howell is in his last term representing the 82nd district. Gary Eisen was elected to serve the 81st district in 2018. Both are Republicans.

As for the congressional maps, the commission has revolved through several versions that would impact Lapeer and St. Clair counties. Currently, both are represented in Michigan’s 10th District by Republican Lisa McClain, along with most of the Thumb and northern Macomb County.

Several of those proposed maps show the district’s boundary moving further south to include portions of Oakland County and a larger swath of Macomb County.

Residents are being asked to submit comments on proposed maps and the redistricting process.

To view the maps or leave a comment, visit michigan.gov/micrc and click on the ‘Proposed Draft Maps’ link. From there, users can select the Congressional, State House or State Senate tabs to see the latest proposals and submit a public comment.

In 2018, voters amended the state constitution to create an Independent Citizens Redistricting Commission and last fall the 13 member commission—consisting of four Republicans, four Democrats and five independents—was seated and began the redistricting process.

For more information about the commission, visit redistrictingmichigan.org.