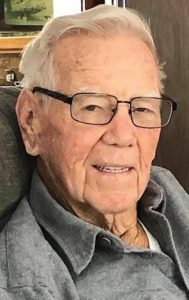 Jack D. Halstead, 89, of National City, MI formerly of Imlay City, died September 27, 2021. Jack was born in Imlay City on December 29, 1931. He was the son of the late Gerald and Ruth Halstead. Jack grew up in Imlay City and attended Imlay City Schools. Jack married Myrtle Ann Hill on August 9, 1952. They lived in the Imlay City area until they relocated to National City.

Jack and Myrtle loved to spend their winters in Florida. Jack was a journeyman for Ford Motor Company until he started his own landscape business. Jack enjoyed hunting and spent many hunting seasons in the U.P. with his family and friends. Jack also enjoyed fishing, taking care of his lawn and gardening. Jack was a “fixer” of everything. If it was broke, he fixed it. For years, every Fourth of July was spent at Grandpa Jack’s, where the family enjoyed his famous corn roast and special pancakes. Jack was also a member of the Free & Accepted Masons – Attica/Lum Lodge.

Jack is survived by his wife of 69 years, Myrtle Ann; his sons, Larry (Patty) Halstead of Imlay City, MI and Matthew (Carrie) Halstead of Hale, MI; and his daughters, Carol (Bob) Fischhaber of Swayzee, IN and Vonda (Kevin) Zuhlke of Brown City, MI. Also surviving are 15 grandchildren; 26 great-grandchildren; his sister, Mary Ann Kendrick; sister in-law, Jarry Lynn Halstead; and several nieces and nephews. Jack was preceded in death by his parents, Gerald and Ruth Halstead; his brother and sister-in-law, Francis “Bud” (Vickie) Halstead; and his brother, Jerry Halstead.

The Halstead family has graciously entrusted these services to the Goodland Community Church and Muir Brothers Funeral Home of Imlay City.

Please be sure to sign the online register book at www.muirbrothersfh.com to share your memories and condolences with the Halstead family.