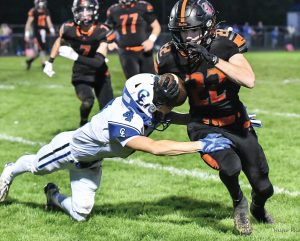 ALMONT — The Almont varsity football team fell behind 27-0 at the half, leading to a 41-7 loss to Cros-Lex in their homecoming game last Friday night.

“Cros-Lex is clearly a very talented team,” Almont Coach James Leusby commented. “They played well in all phases of the game and they were just too much for us to handle,” he noted.

“We had a great homecoming crowd with a lot of support from our community and our kids are very appreciative of that. We just have to get healthy and get back to work for another tough opponent next week.”

In Friday’s game, Almont spotted Cros-Lex a 7-0 edge after one quarter was over with.

Cros-Lex then amassed 20 points and Almont managed none during quarter two, good for a 27-0 lead at the half.

The third quarter saw Cros-Lex collect seven points as did Almont. That left them holding a 34-7 cushion with 36 minutes gone.

Cros-Lex then outscored Almont 7-0 from that point on, earning a 41-7 win.

For the night, Conger completed seven of 17 pass plays for 94 yards as Almont’s quarterback. He threw two interceptions along the way.

His successful tosses went to four different targets. Measel (four catches for 59 yards), Mason Smith and C. Nascivera (one catch for 17 yards each) plus Haden Lacavera (one reception for one yard) formed that group.

The Almont ground attack wound up with 80 yards on 34 totes.

The Almont defense also registered one takeaway. Ferqueron (an interception) furnished that.

Almont will look to return to the win column when it hosts Armada this Friday. The BWAC battle is slated to get underway at 7 p.m.