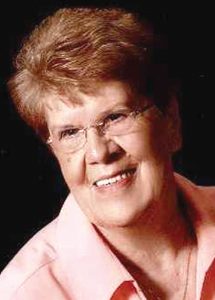 Shirley Sirois, age 88, of Imlay City, MI passed away Saturday, September 25, in the comfort of her daughter’s home surrounded by her family. Shirley Myrtle Marter was born July 20, 1933 in Roseville, MI. She was the daughter of the late Harvey and the late Rose (Patow) Marter. Shirley grew up in Roseville, MI. She was a graduate of Roseville High School, Class of 1951. She married Gerard “Jerry” Sirois on October 15, 1955. Shirley and Jerry were married 63 years. Shirley and Jerry moved to the Imlay City, MI area in 1967. Jerry preceded her in death.

“I am home in Heaven dear ones: oh so happy and bright! There is perfect joy and beauty in this everlasting light. All pain and grief is over, every restless tossing passed; I am now at peace forever. Safely home at last.”

Shirley’s family would like to thank United Hospice of Marlette for their loving and compassionate care.

She was the special aunt of Frank Clark (Pam) of Shelby Twp., MI.

A private family memorial and Celebration of Life is being planned for a later date.

Please be sure to sign the online register at muirbrothersfh.com to share condolences and memories with the Sirois family.