“This was a great atmosphere for high school football but it was a tough way for the game to end for us,” Almont Coach James Leusby commented. “North Branch controlled the ball for a large part of the game which prevented us from getting in an offensive rhythm,” he noted.

“Our defense played well and our kids battled all the way to the final play of the game. I am proud of the effort but we will have to get back to work to realize our potential.”

In Friday’s game, Almont and North Branch ended the initial quarter with zero points each. 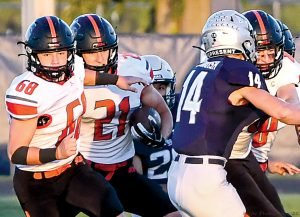 Almont’s Mason Smith heads up the field with blocking help from Luke McIntosh.

That was followed by scoreless third quarter of play.

Almont and North Branch then struck with seven points apiece during quarter number four, making it a 14-14 ballgame at the end of regulation.

North Branch then outscored Almont 6-0 in overtime, pulling out a 20-14 victory.

For the evening, Conger completed zero of seven pass plays for zero yards as Almont’s quarterback. He threw zero interceptions along the way.

The Almont ground attack wound up with 112 yards on 33 totes.

Almont will look to bounce back this Friday when it entertains Blue Water Area Conference rival Cros-Lex. The contest, Almont’s homecoming, is scheduled for 7 p.m.