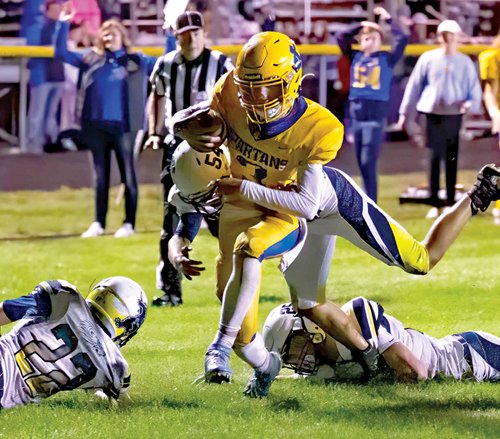 “A stout defense in the first half kept us in the game until we finally got out offense running on all cylinders,” Imlay City Coach Brian Tresnak said. “The offensive line is finally starting to coalesce after some shuffling earlier in the season and did an excellent job during the second half,” he noted.

“It was a solid team effort all the way around. We need to have a good week in practice to build on the win.”

In Friday’s matchup, Imlay City spotted Algonac a 6-0 edge after one quarter was done.

Imlay City then responded to the challenge presented them, outscoring Algonac 12-0 during the second quarter and 20-0 in the third. That left them up 32-6 with 36 minutes gone.

The host then outscored Algonac 13-8 from that point on, putting the finishing touches on a 45-14 victory.

For the evening, Burgess completed four of 11 pass plays for 67 yards as Imlay City’s quarterback. He threw one interception along the way.

His successful tosses went to two different targets. Their ranks consisted of Julian Rojas (three catches for 52 yards) and Brady Vanderploeg (one reception for 15 yards).

Imlay City returns to action this Friday when it travels to Armada. The BWAC clash lists a 7 p.m. starting time.