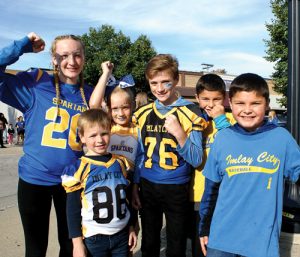 After the parade, the fun and activities moved to Lamb-Steele Park, where the Imlay City Downtown Development Authority hosted another Friday Night Bike Night, along with a ‘Custom Chopper Giveaway’ sponsored by the Sam Bernstein Law Firm.

A sizeable crowd at the park enjoyed cuisine, beverages and live music provided by Motor City Josh & The Big Three.

Also on hand were representatives from Volunteers of America, selling raffle tickets to win the motorcycle; and “Wheelin’ Team 457,” who were selling tickets to assist wheelchair athletes and others who are wheelchair-bound.

Wheelin’ Team 457 is a 501(c)(3) nonprofit organization and is funded by grants, fund raising, and private donations.

According to a video posted on the Volunteers of America Facebook page, the raffle raised more than $20,000 that will be used for veteran housing assistance. The winning ticket was purchased by Mike McDonald of Warren.

Former Red Wing Darren McCarty had been expected to make an appearance but was not able to attend.