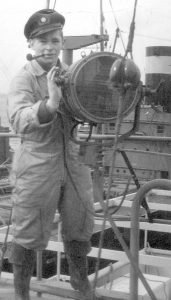 Arthur E. Dungey, former lifetime resident of Imlay City and Lapeer, has passed away in Kalamazoo at the age of 93. Art was living in the home of his son Paul (Connie) Dungey. He entered the Church Triumphant peacefully, in his sleep. He was preceded in death by his loving wife of 72 years, Theresa Lorraine Dungey; and a sister, Mary Lou (Don) Erla. Art is survived by a sister, Carolyn (Clare) Touchette of Hayes, VA; sons, Paul (Connie) Dungey of Kalamazoo and Chris (Sharon) Dungey of Lapeer; grandchildren, Ian Dungey of Columbiaville, Rachel (Christopher) LaLonde of Portage, MI, Ryan Dungey of Hudsonville, MI and Nick (Danielle) Dungey of Galesburg, MI; and numerous great-grandchildren, nieces and nephews.

Born September 23, 1927 in Goodrich, MI to Oren and Edna Dungey, Art graduated from Imlay City High School in 1945. He served his country in the U.S. Merchant Marine for two years, bringing troops and wounded home from Europe. He also made several tanker runs to Venezuela as the U.S. restored its postwar strategic oil reserves. He boxed on the Spartan boxing team, winning most of his matches, and it was a matter of great pride that he was part of a Spartan offensive line that blocked for All­ American, Al Dorow. He became a lifelong MSU fan when Dorow went there.

Art went to work for Detroit Edison after his sailing service, reading meters in Huron County. He trained his way up to home serviceman and transferred to Lapeer in 1958. After taking college management classes, he eventually became a service planner out of the Lapeer office. He retired after more than 40 years with Detroit Edison, then spent many winters in Homosassa, FL.

As a member of the “Greatest Generation,” Art Dungey was possessed of an eclectic variety of skills and interests. Here are a few: He hunted and fished in all seasons; pheasants and ducks in Huron County, deer Up North as a charter member of LBC&O Hunt Club in Oscoda County. He learned to fly, soloed, and owned a plane with son Paul. He built a canvas duck-boat, carved decoys, restored a vintage speedboat, and built a Heath Kit radio; always had a garden; always canned and pickled. He bowled in Lapeer and Imlay City Leagues; was active in Scouting as a young man; golfed until he couldn’t swing a club. He worshiped and was active in UC of Christ, Congregational in Imlay City and Lapeer Elks. He was a member of Imlay City’s first volunteer EMS in the early ’70s. He tried his hand at oil painting and copper hole punch; loved Broadway musicals; and was always reading a novel of some sort. He loved his pipe, cherry cheroots, and a few fingers of Scotch in the evening.

Cremation has already occurred and a memorial service will be announced soon.