A familial transition at Almont’s WWTP

When he retired on Aug. 31, Farley had spent 32 years working at the sewage plant; including the past 29 years as plant superintendent.

Though his retirement had been expected, Farley’s departure left a vacancy that needed to be filled by a competent plant operator.

As fortune would have it, Mark was afforded the opportunity to hand off his former responsibilities to his son, Clinton Farley.

This week, father and son met at the plant while unofficially marking their respective personal and professional transitions.

Clinton started out as a trainee at the wastewater plant in 2011, and acclimated quickly to his duties and surroundings.

It wasn’t long before he discovered that he enjoyed working at the plant.

Moving steadily up the ladder, Clinton acquired his Class D, Class C, and more recently, his Class B operator’s certification.

The Class B license allows him to operate a treatment facility capable of serving a population of between 10,000 to 50,000 people. 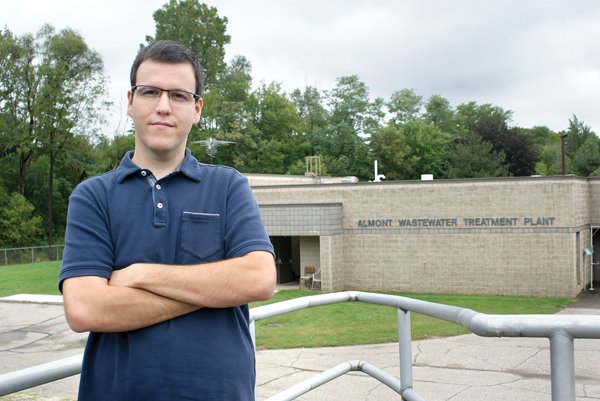 Clinton Farley is proud to be given the opportunity to follow in his father’s footsteps as plant superintendent at the Almont wastewater treatment plant, located at the foot of Water Street.

As such, Clinton has met all the requirements and mandates established by the State of Michigan’s Department of Environment, Great Lakes, and Energy (EGLE).

During a visit to the plant on Thursday, Clinton exuded the confidence one might expect from someone just presented a new and challenging, but hard-earned opportunity.

“I’ve learned a lot from my dad and other people in the 10 years I’ve been here,” said Clinton. “I appreciate the support of the village council and for giving me this opportunity.”

“Mark obviously did a tremendous job at the plant for many years,” Schneider said. “Now, knowing that Mark has personally trained and taught Clinton everything he knows about the plant’s operations, he’s earned the promotion.

“Had we tried to find someone with more experience than Clinton, we likely would have had to spend a lot more money; money that the village does not have.

“As things are, Clinton already knows the intricacies of this particular plant — which are unique to this facility,” Schneider continued. “I have no doubt that Clint is going to do a great job for the village.”

Mark Farley is also convinced that his offspring possesses all of the ingredients needed to serve as his successor.

“Clinton has learned a lot over the years,” said Mark. “He has the knowledge, experience, and the technical abilities to take over. He’s ready for this.”

During his lengthy tenure, Mark Farley was often tested with major challenges; including multiple occurrences of rainwater infiltration into broken and cracked sewer pipes; and repeated instances of wastewater overflows into the nearby Clinton River.

Because of the frequent overflows, the Village of Almont was subject to a series of costly fines by the Michigan Dept. of Environmental Quality (DEQ).

It took Farley’s tenacity and sustained efforts by village officials to finally convince DEQ that they had actively been taking steps to resolve the overflow issues.

“We were finally able to get them (MDEQ) to listen, and to show them we were doing everything we could to fix the problems,” Farley recalled. “At the time, the fines were only making matters worse.

He said it took years and a series of costly upgrades to bring the plant into compliance with State of Michigan regulations.

In 2004, a 500,000 gallon equalization basin was constructed along with an expansion of the sludge storage system so the plant could operate more efficiently. It’s cost was $1.2 million; all of which came out of the village’s coffers.

The plant’s influent pumps were also upgraded at the time to accommodate treating an average flow of 470,000 gallons per day.

Almont’s first sanitary sewer and water mains were laid out in 1857.

The original Almont Wastewater Treatment Plant was completed in 1958.

At that time, the treatment process included: a primary settling tank, a trickling filter to biologically remove organic matter, a final settling tank, and chlorination facilities.

The existing sewage treatment plant was constructed in 1989, at a cost of $4.7 million.

The NPDES permit mandates how the treatment facility must remove pollutants from the community’s wastewater.

Clinton Farley reminded that the plant’s primary function is “to provide long-term water quality protection for the north branch of the Clinton River.”

To ensure that responsibility continues to be fulfilled, both Almont’s DPW and WWTP staffs have been conducting inspections to the village’s collection systems in an effort to reduce infiltration into the systems.