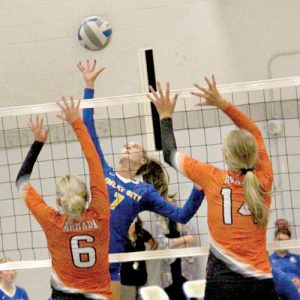 Imlay City’s Alyssa Evans hits over the Armada block in BWAC action this past week.

Jaya Forti handled the bulk of Imlay City’s playmaking responsibilities. She was credited with 25 assists.

Hope Schriber (two) along with Lexa Forti and Verellen (one apiece) had Imlay City’s block assists.