“This was a tough loss for our kids,” Capac Coach Rob Novy said. “We came out and put together a 75-yard drive at the beginning of the game and held Memphis to 25 total yards in the first half,” he noted.

“We missed a huge opportunity to go up two scores in the second quarter when we were inside the ten. Memphis then scored the next 20 points, going up 20-6 a few minutes into the last quarter. We came back with some big plays and then got the ball back with over a minute on the clock but Memphis made some big plays to stop us.”

Despite the disappointing loss, Novy took a few positives away from the contest. 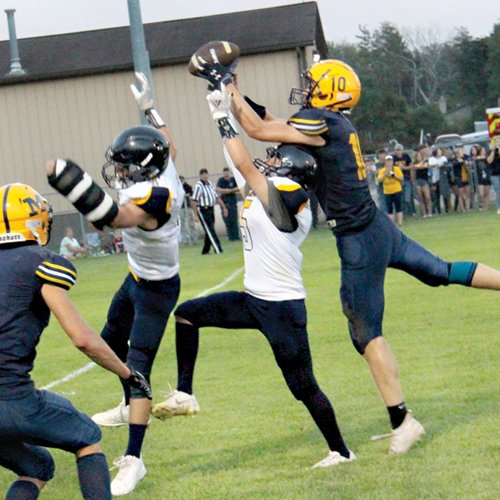 “Derek Mason made two big touchdown catches for us,” Novy commented. “Carlos Uribe-Arce also played well with five catches, including one that went for a touchdown,” he noted.

“Our offensive line did a good job protecting our quarterback Jared Fahley. We start a sophomore (James Meadows) at center and a freshman (Max Klein) at right tackle and and they have been doing a great job all year. Our defensive line of Hunter Tyson, Jorge Navarro, Nate Gaedcke and Wyatt Hurley did a really good job stopping the option in the first half. Zach Langmesser also did a good job coming up and making tackles from the secondary.

In Friday’s battle, Capac took a 6-0 advantage after one quarter was over with.

That was followed by a scoreless second quarter.

Memphis and Capac then generated 12 points each the rest of the way, leaving the former with a 26-18 win at night’s end.

On the night, Fahley completed 10 of 21 pass plays for 171 yards as Capac’s quarterback.

On the opposite side of the football, Langmesser (three solos and three assists) registered Capac’s top tackle total. He was backed by Hunter Tyson and Jorge Navarro (four solos and one assist each) along with Gaedcke (two solos and two assists).

Fahley added a blocked extra point kick to Capac’s cause.

Capac returns to action this Friday when it hosts GTC East rival Marlette. The contest, Capac’s homecoming, is slated to get underway at 7 p.m.