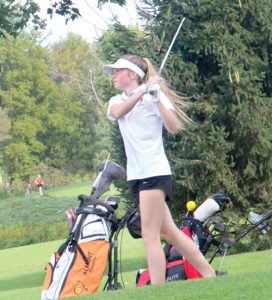 Almont’s Bella Moussiaux follows through on a shot during a BWAC match last week.

Castle Creek Golf Club, in Lum, is where the action unfolded.

For Almont, Jesse Kautz set the pace with a 42 over nine holes. The Raiders also counted Bella Moussiaux’s 56 plus 60s from Autumn Bletch and Taylor Garabedian.

Megan Angelbrandt led Imlay City with a 58. The Spartans were also represented by Dakota Deel (61).