“It was good to be out on our home field in front of our great community tonight,” Almont Coach James Leusby said. “We got out to a good start and kept it going into halftime,” he noted.

“The offense was clicking and the defense went out and executed the game plan again this week.”

On the opposite sideline, Imlay City Coach Brian Tresnak was not as pleased with his team’s performance.

“We need to do a better job getting a push up front on both sides of the ball,” Tresnak commented. “This week is a gut check for players and coaches alike,” he noted.

“There is no halfway. You are either in 100 percent or you’re out.”

In Friday’s game, Almont jumped out to a 12-0 advantage after one quarter was over with.

Quarter two saw Almont amass 20 points and Imlay City manage none, leaving them up 32-0 at the half.

When play resumed, Almont picked up where it left off. Aided by a 7-0 third quarter advantage, the Raiders widened the gap to 39-0.

Neither side scored the rest of the way. 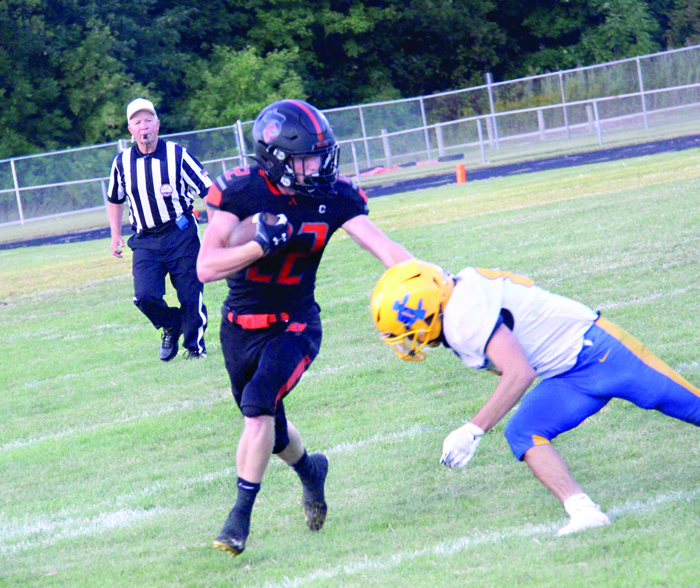 For the night, Conger completed four of eight pass plays for 60 yards as Almont’s quarterback. He threw one interception en route to those numbers.

The Almont ground attack chewed up 271 yards of territory on 35 totes.

Jacob Burgess connected on one of three pass plays for two yards as Imlay City’s quarterback. He threw one interception along the way.

Almont returns to action this Friday when it travels to Algonac, while Imlay City entertains Cros-Lex. Both BWAC clashes are slated to get underway at 7 p.m.