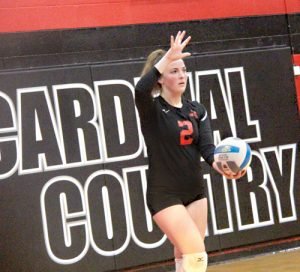 Dryden’s Lauren Abromaitis gets ready to serve during a match earlier this season.

Weiss handled the bulk of Dryden’s playmaking responsibilities. She finished with 17 assists.

Dryden also received one block each from Ashley Hickmott, Emma Raue and Abromaitis.