IMLAY CITY — Did Imlay City’s recent sesquicentennial pique your interest in the area’s history? Then local historian Marilyn Swihart’s newly published book, “So Many Stories to Tell: A Glimpse Into Imlay City’s Past” should quench your thirst for even more accounts and events from the past 150 years that shaped the region into what it is today.

Swihart, a longtime Imlay City Historical Museum volunteer, started formulating the idea for the book about four years ago.

“When I became involved in the museum I realized what a wealth of information that was there was not being shared,” Swihart said. “I would do research projects for people and write little stories for each one, and this book became a way of consolidating them into one place.” 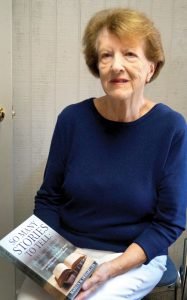 Marilyn Swihart, of the Imlay City Historical Museum, holds a copy of her new book “So Many Stories to Tell.”

“So Many Stories to Tell” features just over 450 pages and 18 chapters that each focus on a different theme, including the history of Imlay City’s hotels and motels (Places to Stay Along the Way), modes of transportation (Are We There Yet?) and an account of Imlay City’s newspapers (Hear Ye, Hear Ye).

Another chapter focuses on what is described as the area’s “Silent Cities,” its cemeteries.

Some of the author’s favorite accounts date back to around the turn of the century, when Imlay City-area residents traveled to their homelands in Europe and then reported on what they experienced.

“It really gives you a flavor for that period of time,” Swihart said.

She said the book was originally written in honor of Imlay City’s sesquicentennial, the 150th anniversary of the city’s founding.

That special milestone occurred in 2020 but wasn’t able to be formally celebrated until August of 2021 when the city hosted a two-day festival.

Appropriately, Swihart was named grand marshal of the Sesquicentennial parade and coordinated the All-Class Reunion hosted by the Imlay City Alumni Association that weekend.

Previously, Marilyn and her late husband, Bruce, were named Citizens of the Year by the Imlay City Chamber of Commerce for their work to preserve local history.

Swihart will sign copies of her book at the Imlay City Historical Museum on Saturday, Sept. 25 from noon – 4 p.m.

All proceeds will benefit the continued operation of the Imlay City Historical Museum.

As the title suggests, Swihart feels the book really only skims the surface of Imlay City’s rich history and she’s confident there’s enough material for a second volume or possibly other books on related topics.

“I’ve always wanted to do a history of the school district,” Swihart said, herself a longtime school district employee. “A volume on the people of Imlay City, possibly including Imlay City graduates who went on to live notable lives in industry and sports.

In addition to stories, the book’s glossy soft cover features many photographs.

Books are $27.50 plus shipping and handling if mailed. Or copies can be obtained at the museum on Tuesdays from 9-11 a.m. and on Saturdays from 1-4 p.m.

For more information, contact the Historical Museum at ichistoricalmuseum@gmail.com.