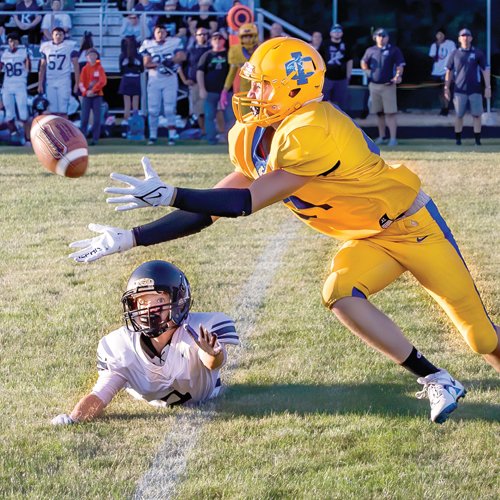 Brady Vanderploeg, of Imlay City, looks to intercept a pass during a game with Richmond last Thursday.

In Thursday’s clash, Imlay City and Richmond ended the initial quarter with zero points each.

Imlay City then outscored Richmond 14-7 the rest of the way, only to drop a 28-20 verdict.

“We made huge strides this week,” Imlay City Coach Brian Tresnak said. “That was especially on defense,” he noted.

“We did a good job rallying to the ball and forcing turnovers. Offensively, we played well in spurts but need to do a better job getting a push up front and sustaining drives.”

Jacob Burgess completed eight of 15 pass plays for 81 yards as Imlay City’s quarterback. He threw zero interceptions along the way.

Julian Rojas had all of Imlay City’s receptions.

The Imlay City rushing attack wound up with 127 yards on 46 totes.

Imlay City returns to action this Friday when they travel to Almont for a Blue Water Area Conference game. That matchup is scheduled for 7 p.m.