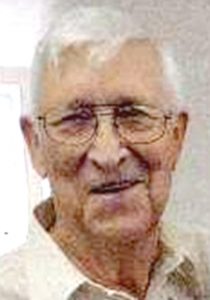 Edward “Buddy” Redd, age 94, of Hale, MI died Wednesday, September 1, 2021 at his home surrounded by his loving family. Edward Walter Redd was born December 23, 1926 in Armada, MI. He was the son of the late Walter and the late Hazel (Odel) Redd. Buddy grew up in Romeo, MI. He attended Country School. He married Leota Ann Geiser on September 12, 1947 in Almont, MI. After getting married Buddy and Leota moved to Almont, MI until 1979 when they moved to Hale, MI. He was preceded in death by his wife, Leota, November 12, 2015.

He was employed as a steel press operator for the front end of cars by Ford Motor Company – Transmission Plant in Sterling Heights, MI for 30 years before retiring.

Buddy enjoyed snowmobiling, hunting deer, cutting wood, and feeding the wild turkeys. He was too busy in retirement to go for coffee. Buddy loved woodworking projects and made the family cabinets, entertainment centers, wall sconces, and grandfather clocks. Through the years, he built three homes that his family lived in.

He was preceded in death by his wife, Leota Redd; daughter, Julie Covert; his son, Edward Redd; grandsons, Derek Nolin, Matthew Covert and Nicholas Redd; and his sisters, Vera Oversby and Marjorie Vick.

Please be sure to sign the online register at muirbrothersfh.com to share condolences with the Redd family.