Lauren Abromaitis led Dryden with six ace serves. She was backed by Becca Weiss, Skylar Graham and Emma Raue (two each) along with Alaina Penn and Addie Tresnak (one apiece). 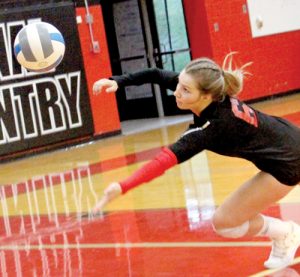 Becca Weiss, of Dryden, looks to return a shot during her team’s match with Capac.

Weiss handled the bulk of Dryden’s playmaking responsibilities. She wound up with 35 assists.