Retired veterinarian appeals for others to offer assistance 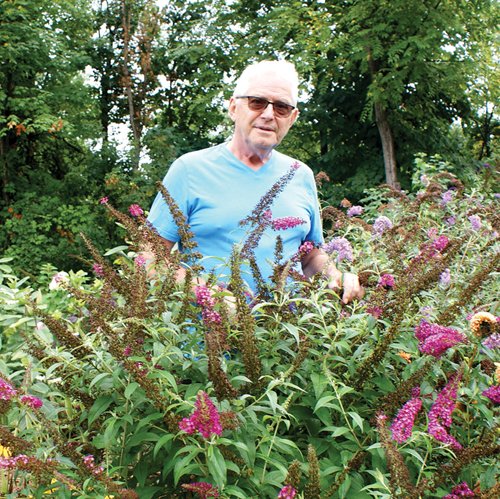 Sillers stands among butterfly bushes and other plants that attract the winged creatures.

Though the garden’s location on Third Street west of Almont Avenue remains a best-kept secret for many residents, Sillers is a frequent visitor and caretaker.

Sillers, 75, devotes several hours a week to watering, weeding and occasionally wading through the garden’s plethora of multiple-hued flowers and plants.

“If it’s not raining, I stop by about every day and water, pull weeds and keep things looking nice,” Sillers said.

“It’s not work for me,” he continued. “I love doing this and have enjoyed gardening all of my life.”

Sillers acknowledged Imlay City resident Kelly Villanueva as being the driving force behind the creation and development of the garden and its grounds.

“It was Kelly who had the idea for a Monarch butterfly garden and got things going.”

In 2016, at Villanueva’s urging, the Imlay City Commission and Parks & Recreation Board collaborated to purchase the property and demolish a dilapidated structure that stood at the site.

Two years later, a sign identifying the site as the Butterfly Garden was installed.

The garden was initially attended to by a handful of volunteers that included Villanueva, Dr. Sillers and Kay Youatt, the wife of former City Manager Tom Youatt.

Recently, however, tending to the garden has been left primarily to Sillers, who would like to see others step up to offer some assistance.

“I’m not always going to be able to do this,” Sillers said. “We need to form a committee of people to share in the process.”

Meanwhile, Sillers continues to do his best to keep the dozens of varieties of flowers and plants pruned and blooming.

Sillers said he’s not the only one who recognizes the beauty of the garden and its surroundings.

“A lot of high school graduates come here to have their senior pictures taken,” he said. “Some people come here just to sit and relax on the benches; or to read a book, or to enjoy some leisure at the gazebo.”

The pergola was constructed a couple years ago by business owner Jaason Bishop of Backyard Creations & More.

Anyone interested in volunteering to help care for the Butterfly Garden can contact the Imlay City Hall at 810-724-2135.