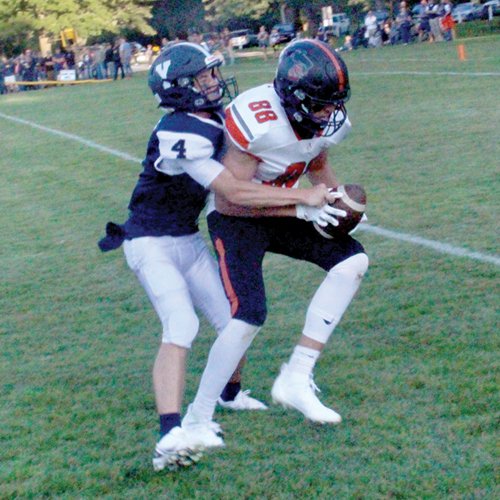 Haden Lacavera, of Almont, hauls in a touchdown pass versus Yale last Thursday.

“It was a great night for high school football,” Almont Coach James Leusby said. “We had a tough game last week but our kids really bounced back,” he noted.

“We executed the defensive game plan very well and got back to running the ball effectively on offense. I am proud of the way we played tonight but we know there is a lot of work ahead of us.”

In Thursday’s meeting, Almont bolted out to a 14-0 advantage after one quarter was over with.

Quarter two saw Almont accumulate 29 points and Yale collect seven, leaving them up 43-7 at the half.

Quarter four would prove scoreless as well, giving Almont a 43-7 win to celebrate at night’s end.

On the night, Conger finished one of one passing as Almont’s quarterback.

Lacavera had the lone Almont reception.

Cole Walton was the other Almont player who opted to air out the football. His only attempt went for an incompletion.

The Almont ground attack chewed up 277 yards on 32 totes.